There can be no denying that we’ve got a nasty market on our hands. A market where the venerable Dow Jones Industrial Average can be up 300 points one moment and down 600 the next. If that type of intraday volatility doesn’t get your attention, nothing will.

As I’ve opined a time or twenty since 2011, I believe the degree of intraday movement in the market is often driven, in large part, by the machines. In short, traders have learned over the years that once the sell algos get rolling, it is best to simply stand aside until the “whoosh” subsides or reverses course. The key point here is that, in my humble opinion, a fair amount of the market’s intraday movements can be viewed as being artificial – especially when things get nutty.

This is not to say that the current decline is unwarranted. At this stage of the game, after enduring more than four weeks of selling action, the reasons for the decline appear to be all too real. Cutting to the chase, stocks are worried about the impact of the trade war (which we hearing about daily from corporate America’s earnings reports), a more aggressive Fed (suddenly 3-4 more rate hikes looks excessive), and the fact that the global economy is slowing (take a look at global PMI/ISM data, the recent Richmond Fed Manufacturing Index, and then the action in the autos, industrials, homebuilders, etc.). Now toss in a little inflation and the word “stagflation” is even starting to make the rounds here.

The selling has been relentless. It’s come in strong waves with some of the most powerful moves in many years. If you watch the intra day “tick” indicator which essentially tells you the cumulative price move for all stocks on the NYSE, up or down, there have been two massive and historic waves where the tick exceeded -1600. That shows indiscriminate selling and it’s not mom and pop hitting the sell button. The reasons are not important and we never truly know anyway. Right now, it’s “get me out at any price!” The magnitude has certainly exceeded my call for a mid to upper single digit decline.

In the very short-term, there should be a rally and I don’t mean a few hundred Dow points. It could be significant. However, I think this rally also fails and leads to a final selling wave over the coming two weeks or so. 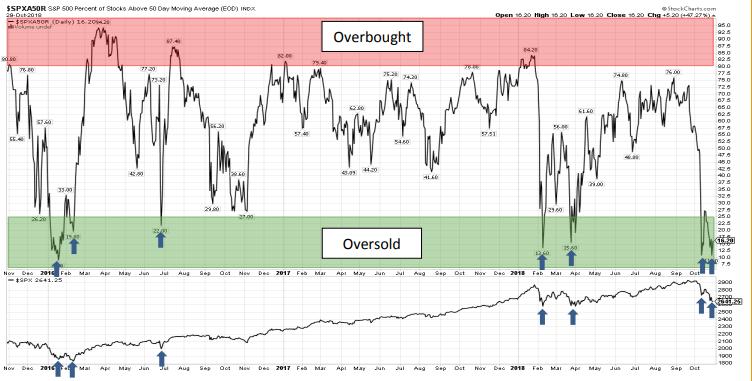 On the bright side, the stock market is extremely oversold and due for at least some sort of a bounce. The top half of the chart above shows the percentage of stocks in the S&P 500 Composite Index that are above their 50-day moving average ($SPXA50R). The bottom is a chart of the S&P 500 Composite Index. Generally, when the $SPXA50R drops below 25, the stock market will stage some form of rally. It does not mean the market can’t continue to decline, but it does increase the probability that the market will form at least a counter trend rally.

Despite an impressive rally yesterday, the S&P will end the week down nearly 4%. The other major indices are following suit and are down like amounts. There is no way around it – it has been an ugly week. Yesterday’s rally looked impressive but, as we mentioned last week, there has been much technical damage to the market and it will take some time to fix. Currently the market is searching for a bottom and, as shown above, there is little support for a bottom until we reach the area around 2,550. If the market breaks that level, then it would get many more talking about the start of a significant bear market. Should the market reverse course here, it will face resistance in the 2700 area. The volatility of the last 2 weeks is likely to continue for a while longer. Impressive up days in the midst of a correction are not unusual and should be viewed as suspect until confirmed by a new trend. The current decline is calling into question the bull market that started some 10 years ago.

However, the fact that the market corrected should not have come as a surprise to readers of this oftentimes meandering morning market missive. For example, back in July and August I began emphasizing the point that many of my favorite long-term market models were not in their happy places and that “risk was elevated.”

And I am pleased to report that we did take some precautionary measures in various portfolio strategies to take both the beta and the exposure of the portfolios down a notch or two.

However, it is important to remember whilst patting one’s self on the back that taking defensive measures is only half the battle! The next trick is to identify when the coast is clear and to attempt to benefit from the pullback.

Which brings us to the title of this week’s macro market missive: How Low Can It Go?